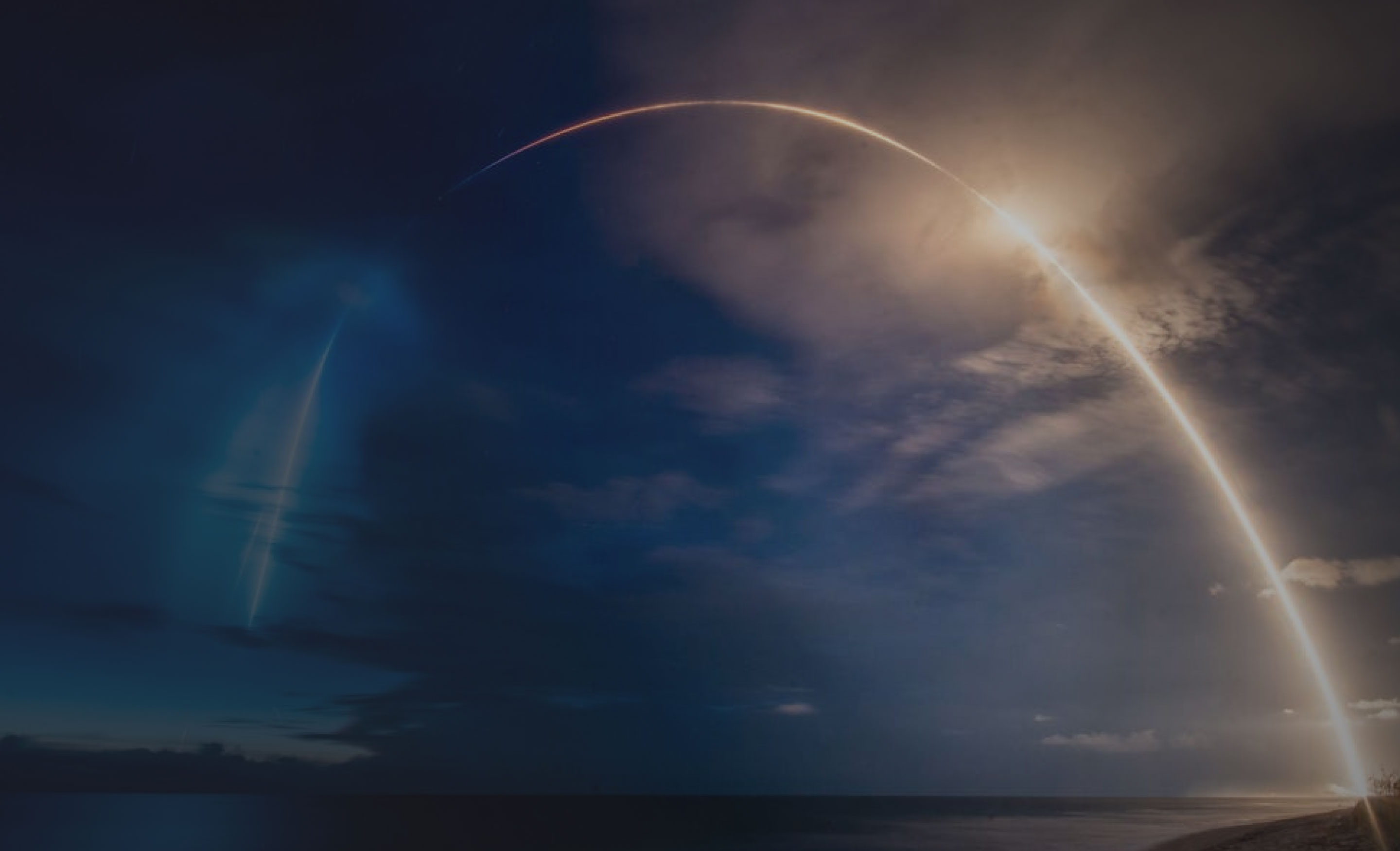 v
- back to all articles
As the SpaceX Dragon rocket lifted off yesterday— a pivotal accomplishment!— I considered the classic sci fi question: Star Wars or Star Trek? Is humanity trending toward epochal conflicts between good vs. evil, oppressive dictatorial regimes, or to a Star Trek-future of ethically-infused exploration, the liberty and self-actualization of discovery.

Elon Musk, NASA and everyone involved with the launch have placed their bets with the latter. Others appear to prefer far darker futures. Back on Earth, social media has much to say about which directions we’re heading.

Trump’s campaign manager (at least for now), Brad Parscale, proudly dubbed Trump’s 2020 campaign Operation Death Star. It’s clear why he’s excited, with the resources and installed base of Trump devotees at his disposal. He brings formidable data analytics and social media powers to the campaign.

Parscale chose an awkward metaphor. Perhaps he’s attracted by the Death Star’s mission to destroy all dissent across the Empire— emblematic of today’s looming threats to democracy.

Meanwhile, recall that a band of rebels destroyed the galactic Death Star with a few photon torpedoes through an ill-conceived exhaust port. It turns out the architects, perhaps unwittingly, desired an Achilles Heel— or failsafe, depending on your interpretation.

At TWIN Global 2019, I moderated a panel titled Future of Truth. Joined by Kristian Hammond, professor of computer science at Northwestern University, European technology journalist Marjorie Paillon of TV France 24 and Pindrop CEO and Founder Vijay Balasubramaniyan, we discussed disinformation, its actors and their tools.

Balasubramaniyan posited, “disinformation and its designers have more tools and more willing participants at their disposal than ever before.” To illustrate the magnitude of the challenge, as of the date of our panel, Pindrop had raised over $250 million. They’re a leader in combating deep fakes— just one manifestation of media exploitation for nefarious ends.

As Hammond illuminated, more shadow puppets play on the walls of our caves than Plato could have imagined. We’re captive and captivated. “Truth is a gorgeous, pure, wonderful thing that almost nobody wants.”

While many of us would like to believe that ‘one truth’ exists, millennia of history should disavow us of such a comfortable notion. As a journalist, Paillon observed, “There is no such thing as neutrality…. It’s my duty to give you as much subjectivity as possible,” for you to build your own perspectives.

While navigating social media, Hammond cautioned that, “it’s the things you want the most that are… usually not the things that are true— because you want them so badly.” Any time a story or soundbite feels so right, be the most skeptical. Someone could be pulling your levers.

During the Covid-19 crisis, rational debates regarding reopening have been complicated by ever more fantastical (read: ‘idiotic’) conspiracy theories. If you believe—or wonder— if Bill Gates created COVID to inject each of us with tracking chips, you’ve been duped. There are so many realities wrong with that position. Social media makes it likely more such dangerous fairy tales will percolate.

Propaganda has surrounded Americans since our country’s founding. During America’s early days, soaring literacy rates and the proliferation of printing presses expanded access to information— and disinformation.

While social media platforms democratize access, they do not democratize influence. Anyone can participate, create and share. Online movements sometimes do arise from collective groundswell.

The US Presidential Election of 1800 was such a dramatic and dirty affair that it featured in Lin-Manuel Miranda’s historical musical “Hamilton.” Here, Miranda and cast perform at the Tony Awards in New York in 2016. EVAN AGOSTINI/INVISION/AP

They can also be fomented by well-funded propaganda initiatives, as experienced during Russia’s interference in America’s 2016 Presidential election.

Echoing Marshall McLuhan, the medium truly has become the message. Social media appears to shape public dialogues in a non-directed, emergent manner from the convergent, colliding perspectives of individuals. Often it does so. Sometimes it provides fogs and screens for powerful interests.

In a commencement speech in 2005, American novelist David Foster Wallace opened with a joke. “There are two young fish swimming along, and they happen to meet an older fish swimming the other way, who nods at them and says, “Morning, boys, how’s the water?” The two young fish swim on and eventually ask one another, “What the hell is water?” It was Plato’s Cave rewritten for our social media age.

Joseph Goebbels remarked that the NAZI Party’s rise to power—the inspiration for the Star Wars Empire, down to the uniforms— would have been impossible without the rise of radio and film. Filmmaking— which incorporated spoken word for the first time in 1927— presented new weapons for the prosecution of public perspective.

One of the most powerful pieces of filmmaking, Triumph of the Will, was also one of the most vile. Hitler’s filmmaker Leni Riefenstahl deployed groundbreaking shots and editing techniques.

While abhorring the spirit and objectives of the film, many of the 20th century’s top filmmakers ranked the film as a work of art. I encourage you to see the film— though keep clearly in mind the repugnance of purpose and devastation that ensued.

Consider the case of William Shirer, CBS correspondent to Berlin during World War Two. Shirer was the American closest to the largest propaganda operation in history (to date) as it went to war with the US. Near Joseph Goebbels’s Berlin headquarters, he received daily copies of newspapers from London, Paris and Zurich, and daily BBC broadcasts—illegal for most German citizens.

Leni Riefenstahl (center) directing a particularly difficult shot during the Nuremburg Rallies, footage which became part of the film “Triumph of the Will.” BUNDESARCHIV/WIKIMEDIA COMMONS

Armed with more facts than any German, he lamented, “Despite one’s inherent distrust of what one learned from NAZI sources, a steady diet over the years of falsifications and distortions made a certain impression on one’s mind and often misled it.”

Shirer’s observations reflect the consternation many of us feel today as we observe the behaviors of otherwise smart, competent, often well-meaning people— even possibly ourselves— “parroting some piece of nonsense they had heard on the radio or read in the newspapers.”

Confronting Goebbels’s lies, Shirer sometimes struggled with discerning the truth. What chance do the rest of us have?

As an antidote to the destructive mania of the age, Charlie Chaplin— the first Hollywood millionaire— produced and starred in the meaningful parody The Great Dictator. I’d recommend watching that as soon as you finish Reifenstahl’s film.

Charlie Chaplin as the dictator, Adenoid Hynkel, in the 1940 satire, The Great Dictator. WIKIMEDIA COMMONS, AP

Back on our panel, Hammond opined, “The shadow we want is the shadow we believe.” The most effective propaganda seduces us.

Humans believing, even against rationality, is not new. The nature of the medium is: social media’s distributed, targeted, profligate reproduction and mutation. Text on paper changes slowly. Broadcast television reaches millions with linear messages. Social media assails from all directions, infects and ricochets.

Paraphrasing journalist Marjorie Paillon, we must find and synthesize sources, gather multiple truths and consider our own subjectivities. Given the scale and complexity of the task, we “must rely on a combination of technology and humans,” as Pindrop’s Balasubramaniyan advised.

For today, celebrate SpaceX’s, America’s, humanity’s epochal accomplishment. SpaceX was once just a fantasy. Fictions of this sort enhance our lives. Fabrications of other sorts catalyze actions against life, liberty and pursuits of happiness. After all, that’s what Death Stars are designed to do.

CAPE CANAVERAL, FLORIDA – MAY 30: NASA astronauts Bob Behnken (R) and Doug Hurley walk out of the Operations and Checkout Building on their way to the SpaceX Falcon 9 rocket with the Crew Dragon spacecraft on launch pad 39A at the Kennedy Space Center on May 30, 2020 in Cape Canaveral, Florida. The inaugural flight will be the first manned mission since the end of the Space Shuttle program in 2011 to be launched into space from the United States. (Photo by Joe Raedle/Getty Images) GETTY IMAGES